Skip to content
In the past 42 years NZ Hanoverian breeders have left an indelible mark on sport horse breeding, this story highlights some of the most influential breeders and riders of the past 5 years.
Breeders:
- Matthews Hanoverians - have contributed many horses to the competition arena in NZ over the past 20 years. This Breeding Program has recently shown its validity and reliability with horses being named in the Dressage NZ training and development squads and one in Show Jumping. Over the years the stud has won seven Young Dressage Horse titles - two, in fact winning at two different age groups. 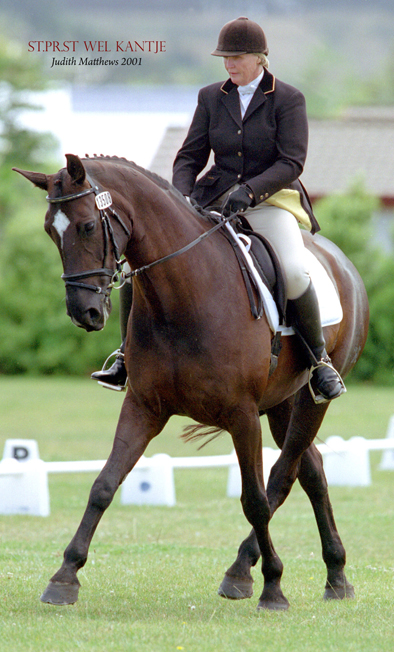 St.Pr.St Welkantje Imp. (Weltmeyer)
They had previously imported mares from Kinnordy Stud in Queensland but their imported mare St.Pr.St Welkantje was a major factor in the quantum leap forward towards breeding International quality horses.
The stud has branched out into some show jumping breeding - producing the 2019 reserve HOYS champion and a North Island 6-year-old age group winner - and the equal top andGold  medal jumping bred foal from the 2019 Verband Inspection tour. 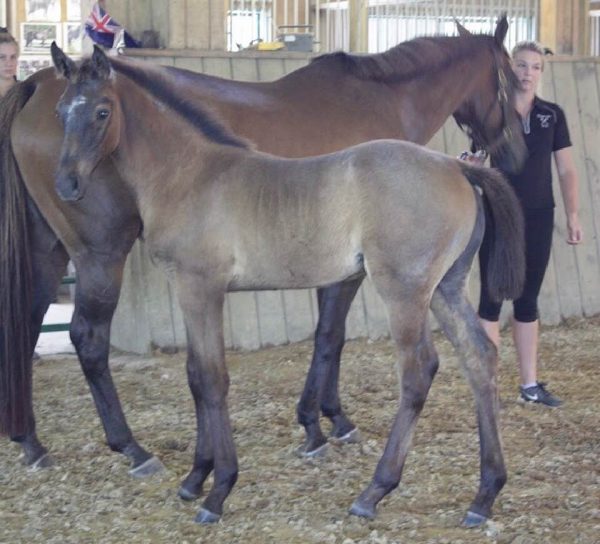 Gold Medal Foal - Copyright MH (Cornet Obolensky/Grosvenor xx)
The Stud regularly turns out Elite mares and Elite Candidate mares during the Verband Inspection tours - which then leads on to the production of top-quality performances in the competition arena after careful preparation and training. 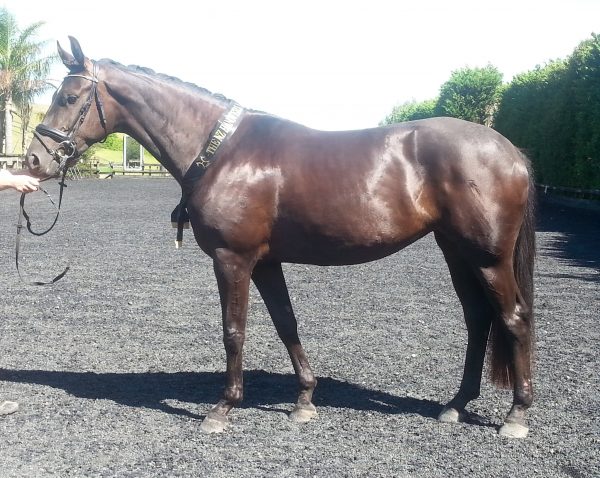 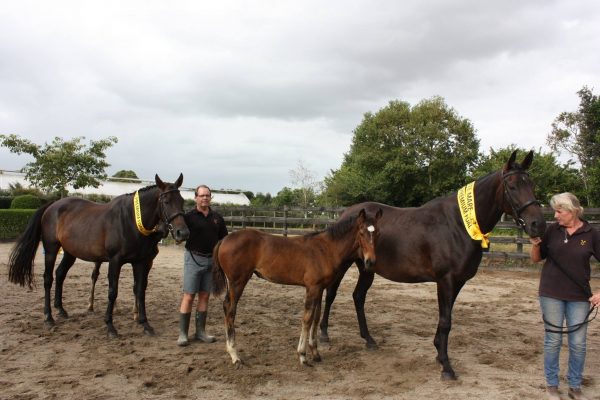 They have several horses in the ownership of Christine Weal Equestrian - all with great prospects for the future. 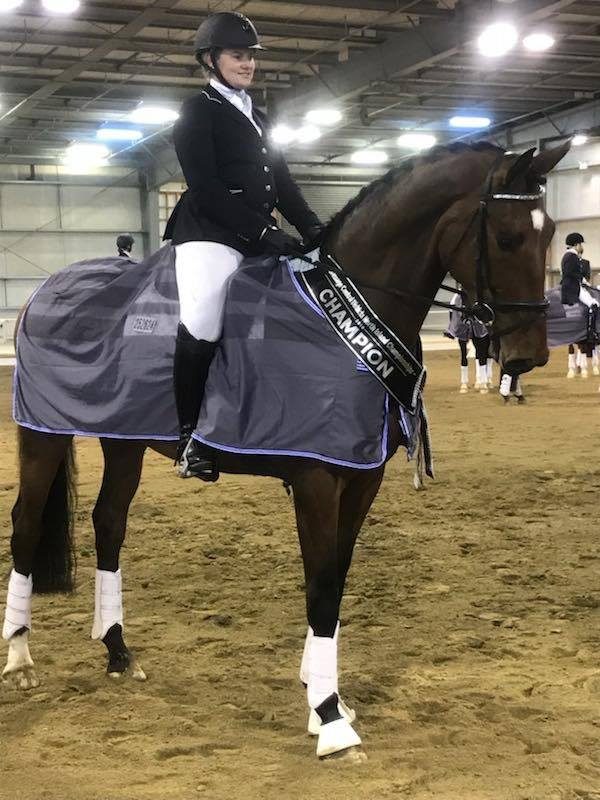 - Henton Lodge Hanoverians
Dave and Bridget Sutton are the first Hanoverian breeders to really venture into breeding jumping horses with their first major International success coming from Henton Attorney General under Lizzie Green, when they won the 4* at Boekelo in Holland in 2013 and were in the winning Nations Cup team at Tattersalls in 2014, as well as finishing second to Sir Mark Todd. 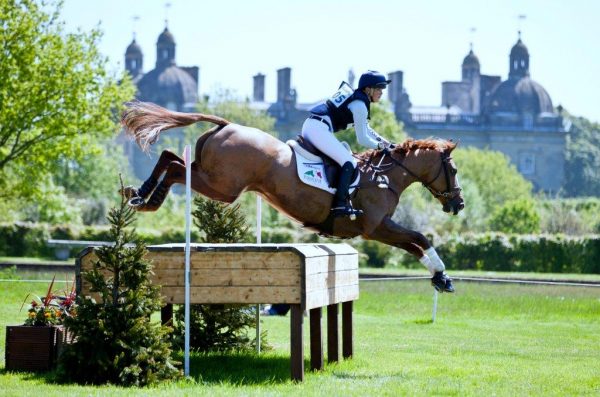 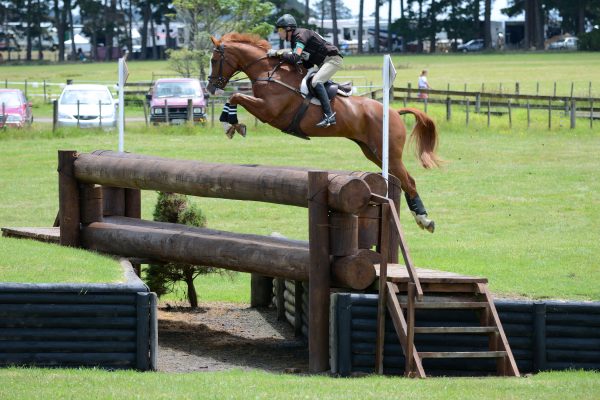 Henton Executive (Escudo I/Distelfink)
They also produced Henton Executive under Matthew Grayling to win the 3* Puhinui Three Day Event In 2013.
Currently they have horses in various levels of eventing In New Zealand along with some pure Show jumping horses, Including the rising star 1.30 HOYS champion Henton Faberge and Henton For Glory - Reserve Champion at both HOYS 5--year-old jumping and National Young Event Horse Championship. 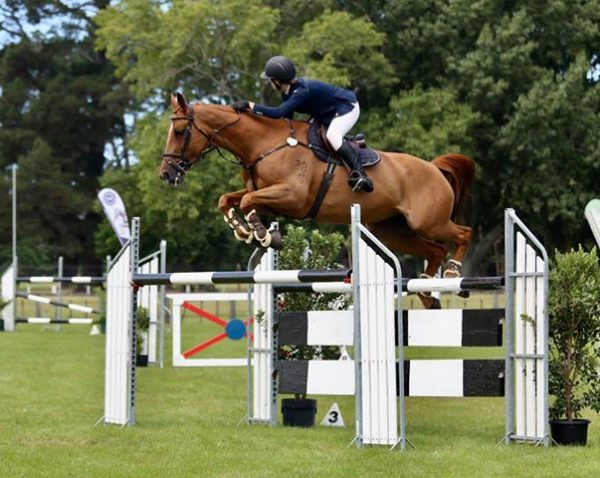 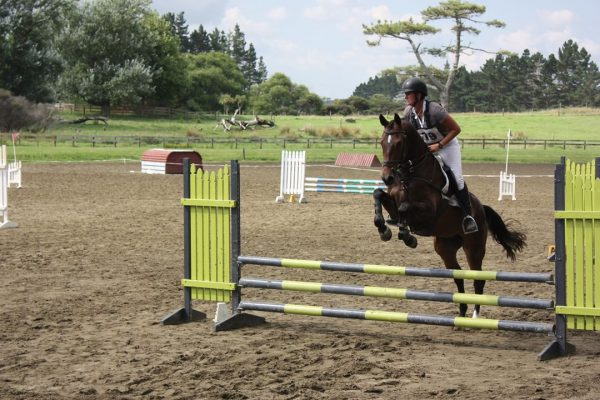 Henton For Glory (For Edition/Escudo I)
They have produced the Top Jumping Bred foal 3 times and have won Best Jumping Bred Family twice also. 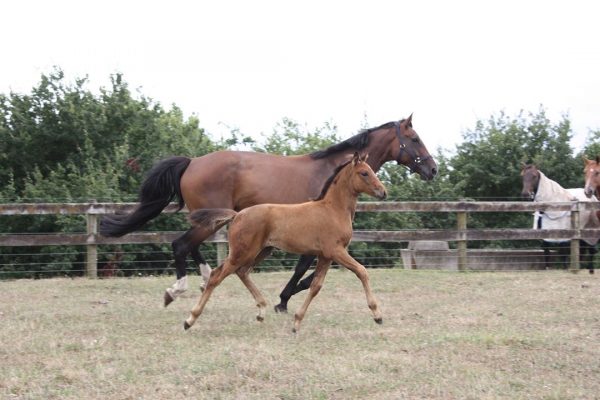 Gold Medal Foal - Henton First Impression (French Buffet xx/Stolzenberg)
- Renai Hart - River Park Hanoverians
Renai is a relatively new breeder who has taken on board the importance of having a robust Breeding Programme with clear selection policies for her mares and the stallions she matches them with. Apart from her own stallions that have been well supported by breeders here - she selects modern and correct stallions from the frozen semen sources and carefully watches the Auctions and Young Horse Show results for direction around what is working and what is successful. 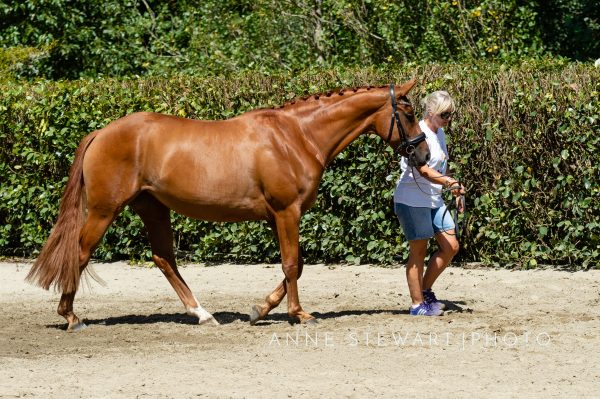 Riverpark Waileah (Worldly/Londonderry)
To date River Park Hanoverians have produced a Top Studbook mare, Top colt foal and successful competition horses here in New Zealand. She imported a Londonderry/Fabriano mare from Australia that is being very reliable in her foal production giving her two Elite candidate studbook mares and Premium foals.
There is excitement mounting for the arrival of her Verden Auction purchase in 2017 - a beautiful filly by Floriscount.
- Phoenix Sporthorses - Nicolette Rendle
Nicolette has been breeding for 2 decades and her patience is bearing fruit now in the form of successful dressage and eventing horses. 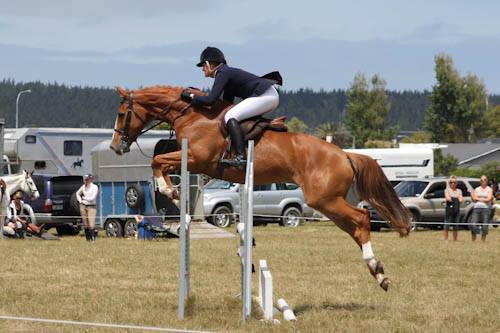 Her foundation mare was by Gaius xx and Nicolette's faith in her has been justified. Her first foal by His Highness is a successful FEI level dressage horse and her daughter an elite mare by For Feeling, produced a promising eventing horse by Hanoverian licensed Holsteiner, Corofino II. 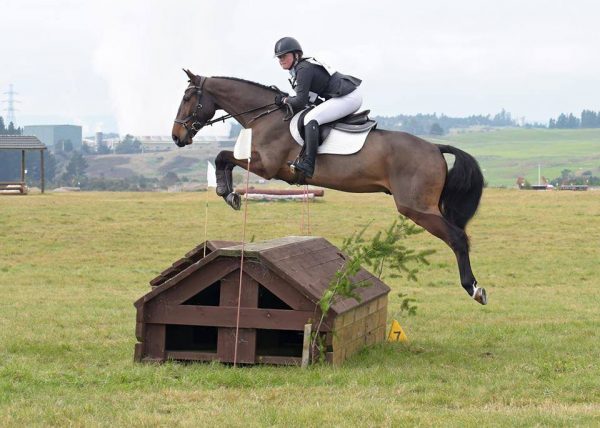 Carter PSH (Corofino II/Gaius xx)
Nicolette has placed promising horses in both dressage and eventing homes in recent times.
Riders:
- Wendi Williamson needs Iittle introduction these days - being the current HOYS Grand Prix Dressage Champion with Don Amour MH by Don Frederico. She also took the half-brother, De Ja Vu MH, by De Niro, to the World Cup Dressage Finals in Omaha, USA in 2017 and has been chosen on the 2019 Dressage squads on four different horses. It is no fluke that these horses are all from the Matthews Hanoverians Breeding Programme - as they have established a great relationship over the past 15 years whereby Wendi and Jonny purchase from the foal crop each year to satisfy the competition requirements going forward at Waitekauri Farm.
- Melody Matheson also has benefactors in the form of Angela Miller and Judith Matthews to provide horses for her to produce at the top level in Show jumping. Thus far, she is doing well - with World Cup round wins, Olympic Cup Reserve Champion at Horse of the Year 2019 with Graffiti MH, and Age Group Wins with Enya MH. 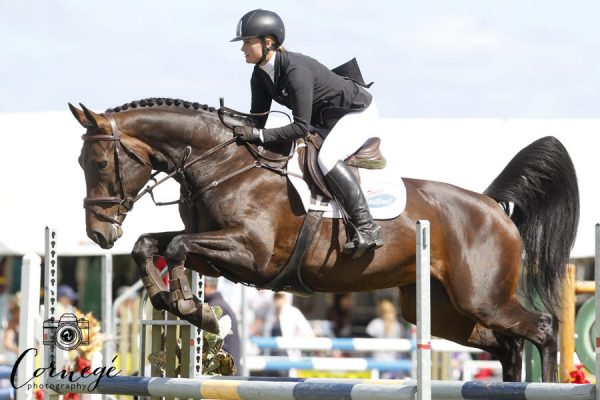 - Christen Lane is a top Eventing rider on the NZ circuit and is currently in charge of two Henton Lodge bred horses, Henton Armada and Henton First Lady. She also has one of her own young ones by Viscount DE about to begin her work on the circuit this year. 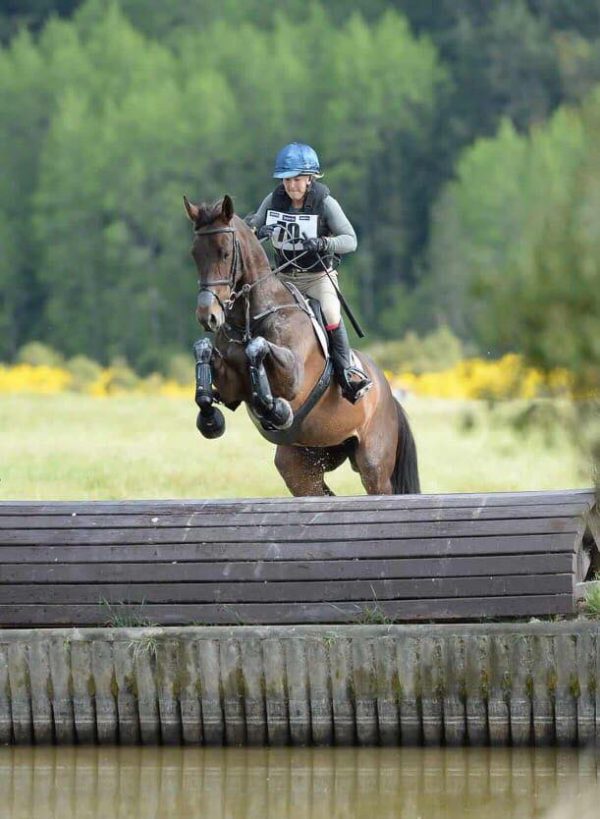 Henton Armada (Anamour/Telereign xx)
- Vanessa Way has had top Hanoverians from the Karaka Hills Sporthorses programme over the years and now she has an up and coming horse by Prestige VDL bred by Kerry Sanders of Timbermill Sporthorses and a fabulous Rheinland bred horse by Furst Romancier from the breeding of David Woolley. 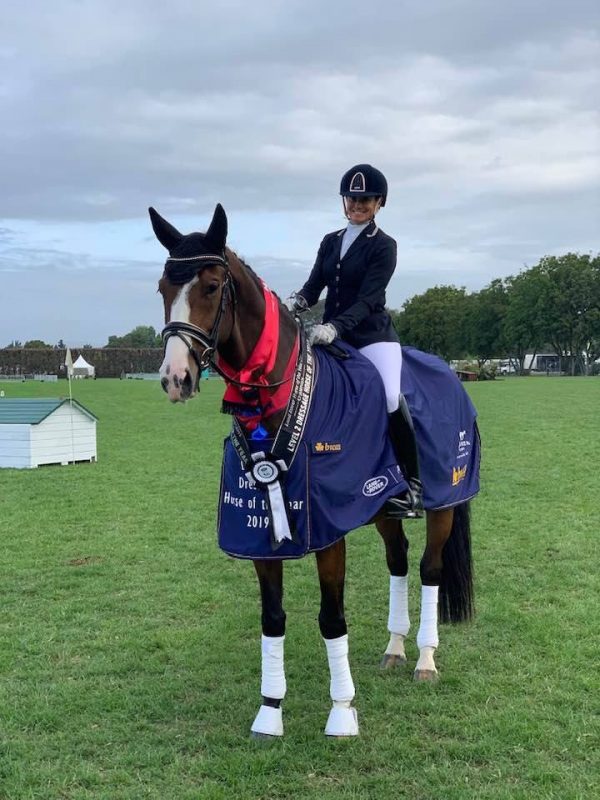 Timbermill Prequel (Prestige VDL/Dream Boy)
- Victoria Wall is into her second year at Grand Prix level dressage with the Limonit mare Letty Lei EDH. She has young horses ready and waiting to compete this year also - from her own programme - which has Rheinland bred yougsters by Sir Donnerhall II, Furstenball and Negro and also a Hanoverian bred by Doringcourt.
Victoria bred the top Rheinland foal in 2017, a colt, Furst Hit EDH (Furstenball / Sandro Hit) and in 2019, a filly, Nationalle EDH ( Negro / Sandro Hit)

The Performance Proof is in The Breeding Programme 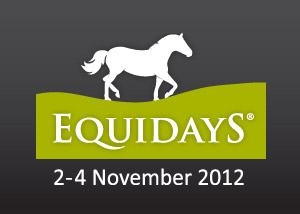