The Hanoverian Society lost one of its most dedicated and loyal members on May 17. Pat Dalrymple was a foundation member since the inaugural meeting of the Society in 1977  and she was a  member of the Winnebago syndicate, the first registered and licensed Hanoverian stallion to be imported to New Zealand.

Pat was 95 years old and still an active committee member of the Hanoverian Society when she died after a fall while staying with her daughter Katherin Gorringe in the South Island.

It was Pat who was the inspiration to bring the Hanoverian stallion Anamour to our country in 1995. A small group travelled to Germany and chose the big black four year old Hanoverian to come to New Zealand to improve the dressage breeding. His bloodlines and performance at the German 100-day performance test proved to be an excellent match for our mares here.

For many years  Pat was on the New Zealand Dressage Judge’s Panel. When she retired in 2004 she was presented with an Honorary Supporter’s Club Badge.

One of the first Hanoverians that Pat bred was Waldebago, by Winnebago out of Ann Hill xx, Pat’s foundation mare. Daughter Katherin and Pat took Waldebago to Europe and Katherin competed on  him  at the International Dressage Championship at Goodwood in England. Katherin was the first dressage rider from this country to compete in Europe. It was a big learning  experience and they were amazed at the number of beautiful horses and their good  riders.

Pat bred 16 foals and had five studbook brood mares. The most famous she bred are Waldebago, Animation and Alert, both by Anamour, and Dancealong, by Dream Boy, that is ridden by Susan Tomlin and competing at Prix St George level and about to step up to Grand Prix level. Alacazam MH by Anamour and out of A Portrait by Allermund, can also count as  one of Pat’s horse family,  the grandson of one of her mares. Alacazam is a Grand Prix showjumper, ridden by Tegan Fitsimon.Pat Dalrymple’s life was never  far from horses. She was a founder member of the North Shore Riding Club in Auckland and remembered travelling with her pony, Seagull, on the vehicular ferry to compete in shows and to go hunting. She also remembered riding from the North Shore to Muriwai for camping holidays with her riding friends. After leaving school, Pat trained with horses for a time in England and then came home to “join in the showjumping and dressage revolution led by Duncan and Helen Holden, ” as it was described by one writer, Joan Gilchrist.

Pat trained as an occupational therapist and married John Dalrymple, a farmer from Bulls. He was not a horseman but was supportive of his wife’s interests. The Bull’s Branch of the Ragitikei Pony Club held their rallies on the Dalrymple farm and Pat was their head instructor.

Pat and John had two daughters, Katherin and Sally, and two sons, Hew and Roger. Sally was an Olympic silver medallist with the New Zealand eventing team riding Squirrel Hill, and the men are running the farm. There are six grandchildren.

Pat and John often hosted visiting Hanoverian members from New Zealand and overseas at Waitatapia  Station. The big home had some great parties. There were large wood fires in winter  and the beautiful garden was a credit to Pat’s love of horticulture. Features were beautiful rose gardens and a haha at the end of the huge lawn. The woodland at  one side of the house was a mass of bluebells in spring.

Pat will be sadly missed by her many friends in all walks of life both here and overseas.

Patricia Dalrymple – we will miss you. 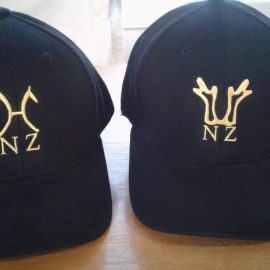 Impressions of the 2013 Hanoverian Tour – by Dr Ludwig Christmann 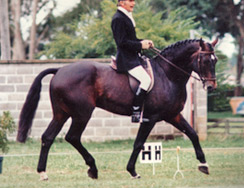 One thought on “Patricia Dalrymple – we will miss you.”