Star British mare Woodlander Farouche has again wowed the judges and spectators, making history with the highest marks ever recorded at the FEI World Breeding Championships for Young Dressage Horses in Verden.

Woodlander Farouche scored the highest marks – 9.88% – ever recorded in the 15 years of the competition.

The British Hanoverian mare (Fürst Heinrich / Dimaggio) ridden by Britain’s Michael Eilberg, who last year won the five-year-old title at Verden, is also the only mare ever to have won the competition for both age groups, and joins the elite group of double winners that includes the stallions Florencio (WEST) and Astrix (KWPN).

The expectation for this mare was enormous. The moment she entered the arena the capacity crowd, many of whom had come especially to see her, fell totally silent. The spectators erupted with cheering and when her score, which included 10s for walk and general impression, was announced they gave her a standing ovation.

“This is a super horse, elegant, uphill with a trot of the highest level, a really impressive walk and an expressive canter,” said Dr Dietrich Plewa (GER), spokesman for the judging panel.

“This mare is so celebrated here – today she has no nationality, everybody is sharing her success,” said the mare’s British breeder Lynne Crowden, who owns her in partnership with Alison Walton and the  Eilberg family.

Farouche has a world champion’s pedigree. Her sire is the 2003 World Young Horse Champion Fürst Heinrich, while her British-bred dam Dornroeschen is by the British-owned stallion DiMaggio who won the accolade in 2000. 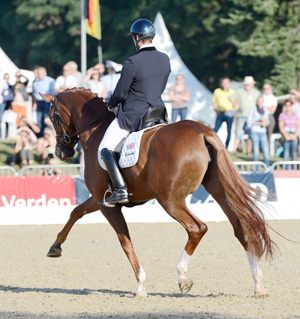 One failed flying change, some activity of the mouth – these were the only points to be criticized, as Dr Plewa said: “Just to mention them, but besides, this ride was almost impossible to top.”

The judges rewarded walk and general impression with a mark of 10, 9.9 for the canter, 9.8 for the trot and the “worst” score of 9.7 for submissiveness.

The chestnut mare finished the Championships with a final score of 9,88 – a score no other horse has ever achieved in Verden before.

The 25-year-young rider dismounted breathlessly, wiped the sweat from his brow and stated: “She is simply wonderful.”

It is hard to believe that Woodlander Farouche was unimpressive as foal. “She was definitely not very attractive and had a pink nose like a little pig – she was called Ginger Pig,”  Lynne Crowden said.

“But I have to thank Dr Ludwig Christmann of the Hannoveraner Verband, who named her Champion Foal, and when she was first under saddle, everybody could see what a fantastic horse she was.”

Michael George Eilberg – who was also second reserve for the British Olympic dressage team – will now travel with his parents to the Olympic Games in London and afterwards compete with Farouche’s dam Dornröschen in an Intermediare II-test.

“Farouche has raised the bar in my breeding programme. I breed 12 foals a year in the hope I can breed another that can match her quality,” said Crowden, who this year bred a full brother to Farouche courtesy of embryo transfer.

The silver medal was awarded to the KWPN stallion Borencio ridden by the experienced young horse producer Emmelie Scholtens (NED), a former winner at Verden with the stallions Asterix (2010 and 2011) and Westpoint 2009. The son of Florencio out of a Lord Sinclair I mare and a twice winner of the PAVO cup in the Netherlands, was described as a horse of ‘high quality’. The final score of 9.1% included a 9.5% for his powerful trot, which was the highlight of the test.

Bronze went to a German horse under Danish flag, the Oldenburg stallion Sir Donnerhall II (Sandro Hit / Donnerhall), earning a final score of 8.78. Thomas Sigtenbjerggaard was very happy about this success. The rider is training the stallion with the Danish Championship rider Andreas Helgstrand. Breeder of the stallion is Maik Kanitzky, owner Henrik Nyreröd. The brown Sir Donnerhall II earned his highest scores for the trot. 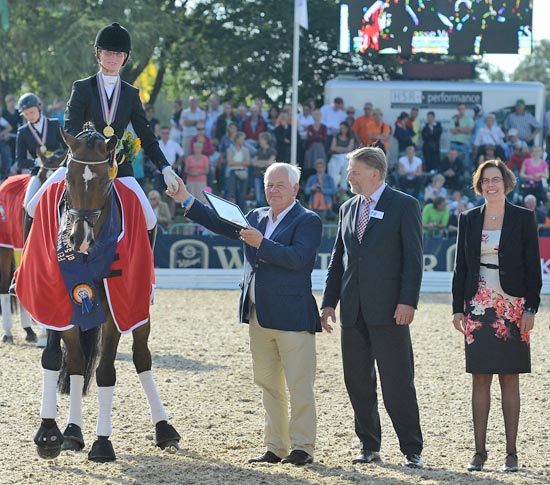 The elegant stallion is five years younger than his full brother, the popular stallion Sir Donnerhall, who was second at Verden in 2006 and sired the five-year-old Champion Sa Coeur, a convincing winner in this age group under Eva Möller (GER).

Sa Coeur (Sir Donnerhall /Don Davidoff) was bred at Paul Schockemöhle’s stud farm, Gestüt Lewitz, and is owned by Hof Kasselmann KG. The horse’s high marks included a 10 for the walk and Sa Coeur was described as “a horse to die for” by Mariette Sanders-Van Gansewinkel, the spokesman for the judging panel.

He has been ridden by Möller for only 10 weeks. “It is so much fun to ride a horse that will do everything right for you,” said Möller, who is trained by her husband Dr Ulf Möller who was victorious at these Championships in 1999 with the now famous stallion Sandro Hit.

The Westphalian stallion Revolverheld 6 (Rockwell-Landstreicher) won the silver medal of this age group, four places higher than his full brother the stallion Rock Forever NRW, who was sixth in 2008. Ridden by Ann-Christian Wienkamp (GER), Revolverheld received a total of 8.98% and a mark of 9.8% for his walk, which prompted the response of “wow” from the judge’s spokesman.

Just 0.4% of a mark behind on a total of 8.94% and the winner of the bronze medal was the Dutch-bred black stallion Duval’s Capri Sonne Jr (Rodium / San Remo), whose canter was described as “powerful and uphill” for a mark of 9.4%. His rider, Dinja van Liere (NED), was delighted with the result. “My goal was simply to ride a good test,” said the 21-year-old.

Riders and horses from 17 nations, including for the first time riders from Brazil and Hong Kong, took part in these championships.

The International Dressage and Show Jumping Festival and the World Breeding Dressage Championships for Young Horses in Verden attracted about 48,000 over the five days – despite the Olympics in London. “I think this is incredible,” said the technical director of the Championships, Freddie Leymann from Belgium, “there were already crowds of people at the WC-arena on Thursday.” 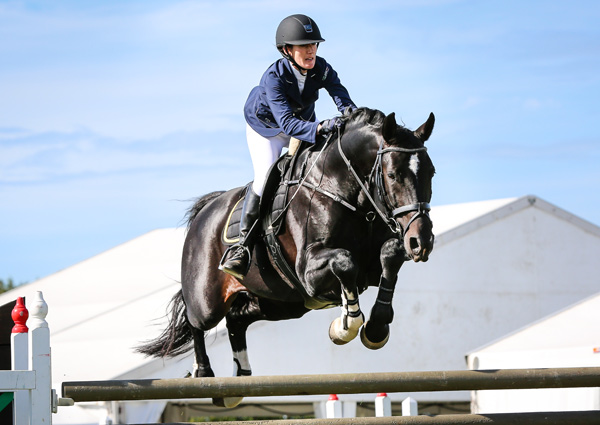 Here’s all you need to know about the Hanoverian 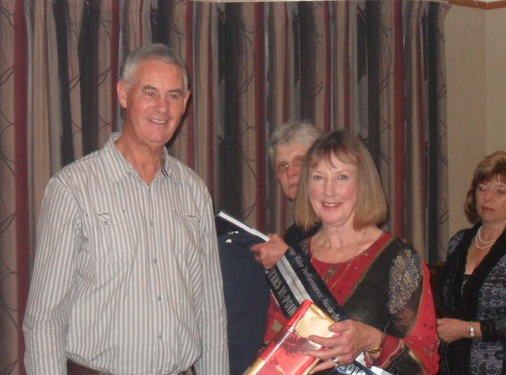