These awards, presented to the breeders of horses whose performance during the last season is considered exceptional, are a way, to “thank” the breeders for their perseverance and commitment to the Hanoverian brand. Each year, members of the Executive Committee nominate New Zealand bred, Hanoverian branded and registered horses in competition, which they consider are achieving consistently above average performances. At the Committee meeting prior to the Annual General Meeting, the nominated horses’ performances are discussed at length before the recipients are chosen by vote. This year, two such awards were presented.

Judith Matthews, representing Matthews’ Hanoverians, breeders of Domino MH, (Dream Boy/Adelheid), was there to accept the first award presented. Ridden by Susan Tomlin, Domino MH has been scoring well all season. They had two wins and two second placings at Tielcey Park on 5th & 6th September 2009. and at the BOP Championships they won the HorseTackNZ Level 4 - 4.3 with a score of 72.436, and also won the Level 4 Zilco freestyle to music - 72.083%. At the Northern Hawkes Bay Championships, December 2009, Domino MH and Susan were engaged in a close contest in level 4, with Vanessa Way’s BL Arawn (Anamour/Cinnamon by Witzbold, bred at Bilbar Lodge).
Highlights of the season for Domino MH and Susan have been
• winning the Medium section at the FEI World Dressage Challenge, held on Saturday Nov. 21st 2009.
• becoming level 4 champion at the Bates NZ National DressageChampionships – Taupo
• third place in level 4 at the Kelt Capital Horse of the Year Show

The other award for exceptional performance went to Henton Lodge Hanoverians, breeders of  Henton Attorney General,
Henton Attorney General is by Anamour from the Distelfink mare, Delphi. He has distinguished himself this season, stepping up to the FEI governed Three Star Level Horse Trials. His first start being at Richfields in November last year, which he won. This gave him the National One Day Championship. He was third at the Puhinui Three Day Event, then won the three star at Woodhill Sands by an astounding 27 points. He finished the season with a fourth place at the Taupo Three Day Event in May of this year at Three Star level. He is most capably ridden and part owned by Lizzie Brown of Hamilton. The pair is scheduled to step up this season to Four Star Level in Adelaide in November; we wish them luck.
The award was accepted by Dave Sutton, representing Henton Lodge Hanoverians

Two imported Hanoverian branded horses also earned awards for exceptional performance.
Doringcourt (Dressage Royale/Gluckspilz), owned by the Bank family and ridden by Andrea Bank, has acquitted himself well. His major accomplishments this season were winning the Elementary challenge at the FEI World Dressage Challenge, held on Saturday Nov. 21st 2009 and winning the Level 4 Horse of the Year title at the 2010 Kelt Capital Horse of the Year Show.

The second award for an imported Hanoverian horse went to the Weltmeyer/Feiner Stern son, Whisper IV. Imported from Australia in February, ridden by Jody Hartstone, Whisper arrived here and swept all before him, winning the Grand Prix title at the Bates National Dressage Championships and the GP Horse of the Year title.

The next three awards were for the Dressage Accumulator Series, which is in its fifth year.

These awards were initiated to reward the owners of successful, registered, Hanoverian horses competing in the discipline of dressage - in the form of a Framed Merit Award and $100.00, and to acknowledge the long, hard hours the riders put into these horses. Points are awarded for placings at three major dressage shows during the season - the North Island Championships, the South Island Championships and the New Zealand Nationals.

The series consists of three awards representing the various stages of a dressage horse’s training.

1. The first award is for Level One and Two - this award went to the owner and rider of Déjà vu MH, Wendi Williamson. Déjà vu MH, by De Niro from Adelheid, is sister to Susan Tomlin’s Domino MH. Wendi and Déjà vu MH have formed a promising partnership, achieving several wins and placings throughout the season, and gaining the reserve championship level one at the Nationals.

2. The second award is for Level Three to Level Five. This award went to an owner/rider who has been a recipient at these award presentations for three years in a row now! In 2008 and 2009 this combination received the award for Level one and two. This year they have been competing in level three.
Susan Tomlin, owner and rider of Guisto MH (Gymnastic Star/Gratiola by Graf Landau, from Matthews Hanoverians’ breeding programme), has had consistent success with Giusto MH, culminating in winning the Level three titles at both the North Island dressage championships and the Bates National dressage champs

3. The final award in the Accumulator Series is for horses competing at Levels Six - Nine and goes to Erin Mortimer the owner and Jody Hartstone the rider of Whisper IV.

Many thanks to Robin Potter for her valuable contribution
coordinating this series. 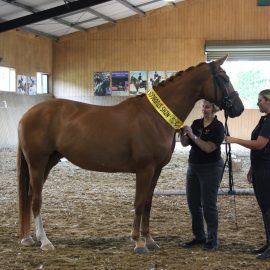 Where does your mare fit into the Studbooks?