An increasing amount of evidence suggests that nutrition plays an extremely critical role in maintaining the reproductive efficiency of the mare. There are critical times when nutritional management can impact significantly on the condition and productivity of the mare.

It is well understood that lactation puts great nutritional stress on the mare. Next to lactation, the nutrient requirements of the mare are the greatest in the last trimester of pregnancy. Rather than putting the mare on a nutritional roller coaster with large changes in the condition of mare occurring throughout the year, it is wise to establish an optimum condition score and try to maintain that condition throughout the year. Condition Score diagrams have been developed to aid breeders in management of the mare. To maintain this "mare optimum condition" there are several factors and times throughout the year that must be considered. It is important to mention that we are referring to the normal mare here, not the "hard-keeping" thin mare or the pathologically fat mare. Management of those mares is a different case and must be handled in a manner other than that for the typical mare.

Post Weaning Management
The time immediately after weaning may be the most important time of the year with respect to the condition management of the mare. As previously stated, lactation places very heavy energy demands on the mare. Some pastures supply adequate quality and quantity of green grass to maintain a mare and foal. In other situations, in order to maintain body weight, you may need to feed the mare a pretty substantial amount of grain during a 6-month lactation. If pasture supplies are limited or dry off, feeding rates for the lactation period range from 4 to 7 kg of feed daily eg NRM Affinity depending on the size and milking ability of the mare. For one week prior to and several weeks following weaning, the mare should have feed intake decreased drastically so that she can dry up and quit producing milk as easily as possible. It is a common practice to completely take the mare off feed when the foal is weaned, and depending on pasture and hay availability, not feed the mare any grain until it gets cold and wet or until 90 days prior to foaling. If the mare and foal are on great pasture then it would be best to move the mare to a paddock which does not supply such high quality pasture. Keep the really good grass for the growing weanling. For the mare that is too fat or for the easy keeping mare, this is a valid approach if pasture and hay availability is adequate. There are several cases, however when we need to consider a different approach to the post weaning management of the mare.

The Thin Pregnant Mare
This mare may be a very heavy milking mare, an old mare, or simply a very poor doer. After the drying off period, it would be sensible to increase the body condition of this type of mare. One would probably want to increase this mare's condition right up to foaling. This strategy will help to replenish her body fat stores in preparation for lactation, thereby reducing post-foaling weight loss and increasing her re-breeding efficiency.

The Thin Barren Mare
This mare may have a multitude of reproductive problems including lactational anoestrous and the inability to get back in foal. It is advisable to get this mare in moderate condition going into the breeding season and perhaps do some nutritional flushing along with having the mares under lights and with an individual feed program starting June 1. Flushing refers to having the mare in an ascending plane of nutrition and gaining weight when she is bred. Though there is little experimental data that shows flushing to increase the reproductive efficiency of the mare, but experience tells us that flushing has a valid role in thin mares.

The Fat Mare
After having read the previous sections it would be tempting to think the mare should be maintained in fat condition after weaning. This approach has some drawbacks even though it may look good for the amateur mare owner. Fat is not always a pretty colour!!! The fat mare has an increased risk of having a foal with bent legs (angular limb deformities) that could, if not treated effectively, limit the foal's athletic potential.
The other drawback of having your mare too fat is that she may be difficult to get back in foal. Consider the situation of the fat mare that has been pampered at home with 3 feeds a day. She is sent to the stud just before or just after foaling and suddenly she's mixed with a new group of mares, is in a new environment and on a new feed program. The mare looses weight and doesn't cycle as well or may shut down entirely. So avoid getting your mare fat even though it may look more pleasing to have her in show condition.

Late Pregnancy Nutrition
There is no magical feeding program for the late pregnant mare but there are a couple of vital considerations that must be incorporated into your program to allow optimum development of the foal inside the mare. Feeding of the late pregnant mare has a major impact on the foal and the weanling. Some of the most important considerations are summarised in table 1.

Table 1: Critical Factors in the Nutrition of the late Pregnant Mare

Trace Minerals are Essential in Late Pregnancy
It has been recognized for over ten years that trace minerals, especially copper and zinc, play an important role in skeletal development in young, growing horses. Deficiencies of these minerals in the equine diet may lead to an increased incidence of physitis and certain forms of developmental orthopaedic disease. What has been less clear is when copper and zinc supplementation are most important during the developmental process. New research from New Zealand has provided important answers as to when trace mineral supplementation is most important in a broodmare's and foal's ration.
This study shows that providing pregnant mares with adequate copper (and zinc) supplementation during late pregnancy will significantly reduce the incidence of physitis and cartilage lesions in their foals. Interestingly, if the mares did not receive copper, their foals developed DOD regardless of whether the foals received copper supplementation or not. Foals out of copper supplemented mares did not need to receive copper supplementation during the first 150 days. Of course, once the foal is weaned, it needs to receive a balanced diet that includes not only copper, but all of the other essential nutrients as well eg NRM PREPARE. A reasonable management scenario would be to begin feeding the foal a balanced grain mix about one month before weaning, so that it is well adjusted to hard feed at weaning.

The copper and zinc requirement of pregnant mares can easily be met by feeding a properly fortified feed eg NRM AFFINITY. The type and amount of feed given an individual mare will depend on her current body condition and the amount of grass available. If mares are in good condition or if they have access to good quality pasture, then concentrate intake may be quite low. In this situation, a concentrated supplement pellet works best as the mare doesn't need the extra energy or protein. 500g of a concentrated pellet eg NRM Mare Balancer Nut can be used to supplement a pasture based ration for a pregnant mare during the last trimester of pregnancy. This large diameter pellet can be fed on the ground to mares.

These are only a few of the multitude of management decisions that the mare owner/manager is faced with. Many mares need to have adjustments made to their body condition. If an optimum condition score has been established for each mare on the farm, then changes in fatness or weight are more easily noticed. The critical concern is to establish an optimum for each mare and try to stay as close to that condition as possible year-round.

This article, written in 2005, was provided by Kentucky Equine Research and reproduced with permission. 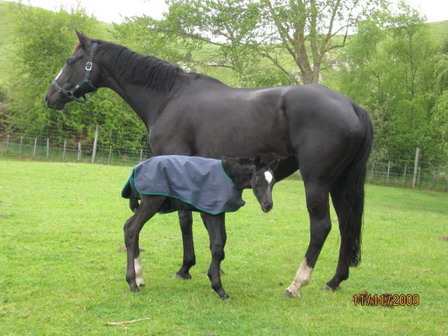