In level two, Robin Potter and Desingz TP (Dream Boy/Distelfink, bred by Robin), achieved a second and a third placing in the Amateur Rider section.

Sharlene Royal and Anacharm (Anamour/Winterkoenig),  had a third and a fifth in level one. Bred by Tina Thorowgood, Anacharm is full sibling to Anaheim II.

Anna Williams and Avalonte (Anamour/Chem xx, breeder Shaun Dromgool), had a second place in level four and two wins in  level three, while Chris Paston and Aldebaron (Anamour/So Sharp xx, bred by Chris), had a third in level four.

This event was a good one for Abbie Deken, who achieved a win with KH Ambrose (Anamour/Winter koenig, breeders KH Sporthorses), in level five, and a first and a third place with BL Adonis (Anamour/Winnebago, breeders Gary and Wendy Freeman, Bilbar Lodge), in level four. In level two, Anarocz (Anamour/Lavinsky xx, bred by Shane and Leanne Smith), achieved a second and a third placing for Catherine West. 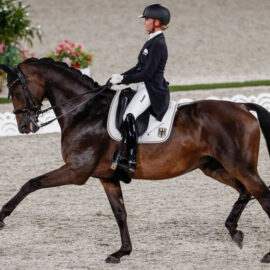 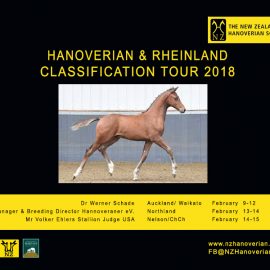